Skip to content
Next
A working vacation in Saskatchewan

Alas, my daughter fell in love, got married, and moved…..TO SASKATCHEWAN.  They live 1600 kilometres away from us now. They bought a house in the city of Moose Jaw and settled down.

This summer, my wife and I planned a two week vacation to Saskatchewan and on the top of my agenda was to replace their eavestroughs with seamless aluminum…..or so I thought.

We arrived in Moose Jaw, Saskatchewan and were greeted by THE MOOSE, the gatekeeper of the city. 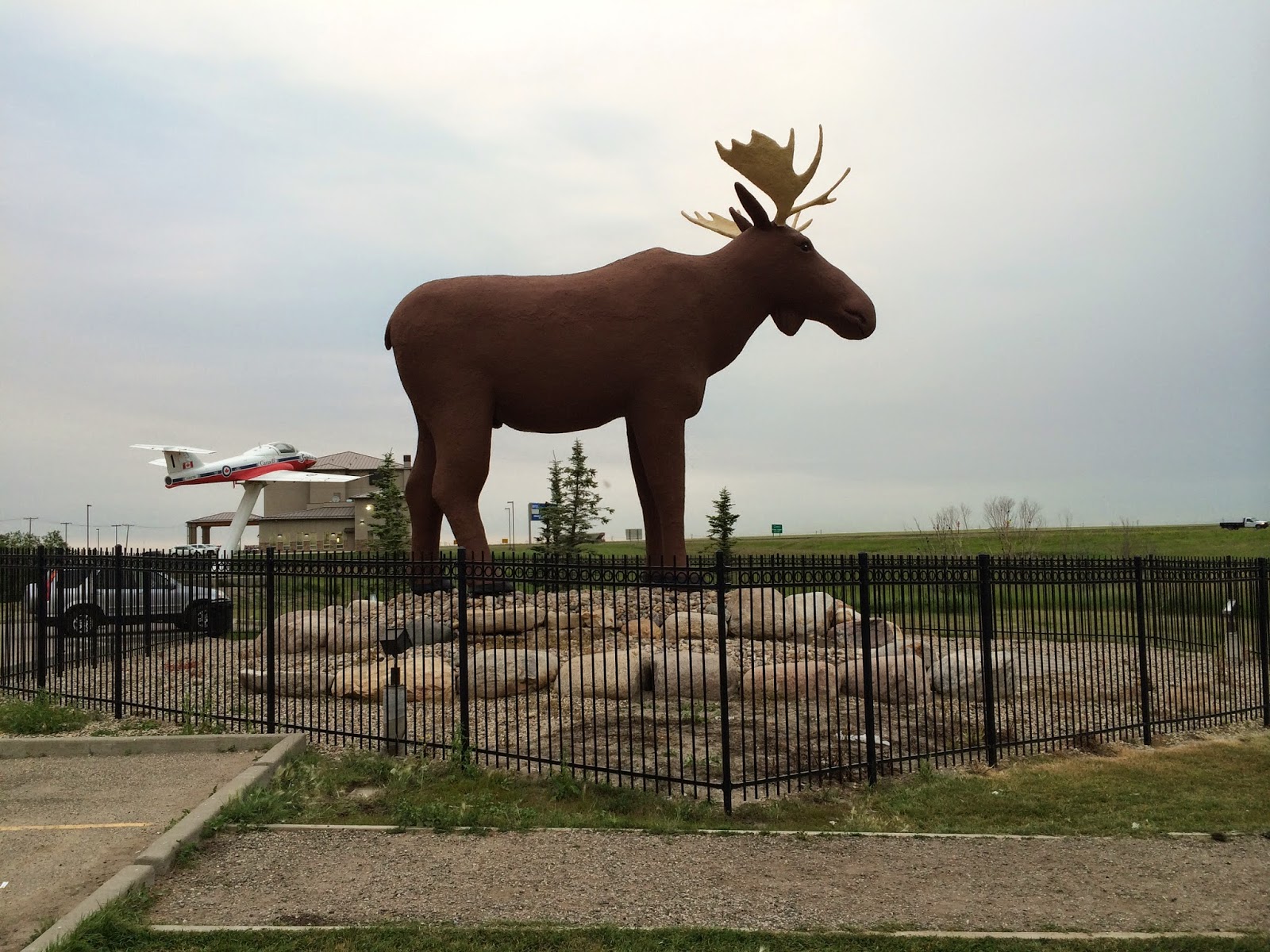 Even the city’s in Saskatchewan feel like small towns in Ontario. People are not as hurried or rushed and it just seems like a friendlier place.

My daughter, son-in-law, and my youngest son (who also lives there) were delighted to see us. We set about doing the eavestroughs right away. The first obstacle we had to overcome was finding a company who could run the lengths we needed so that the eavestroughs would be seamless. Unfortunately, I could not bring my eavestrough truck and machine that far away! I had several companies inform me that they were not willing to run the eavestroughs for me until I found a class act company in Regina, one hour away, Budwards Eaves and Exteriors. 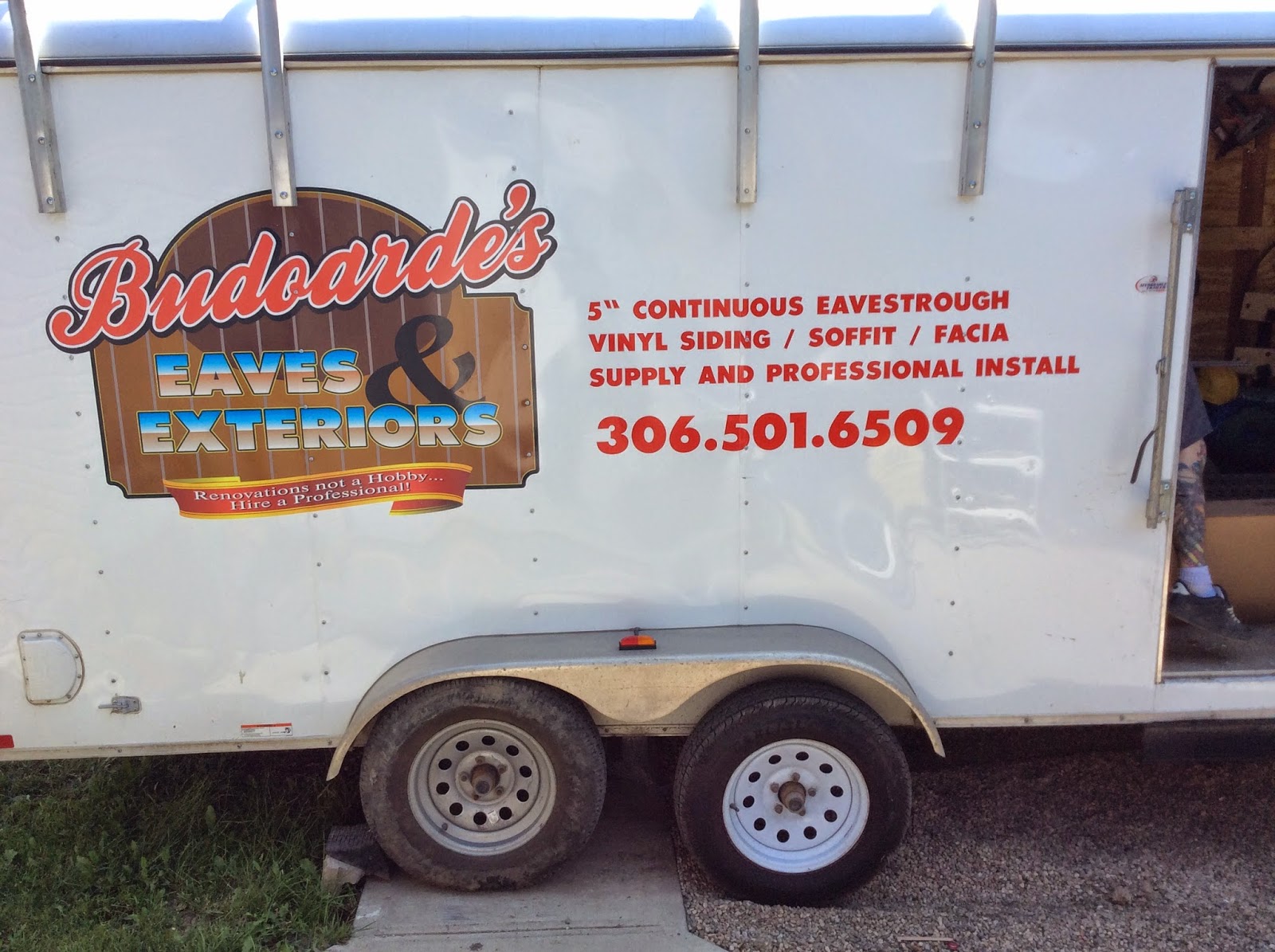 A gentleman by the name of Eddy owns the company and he is originally from Ontario. Here is Eddy and his team: 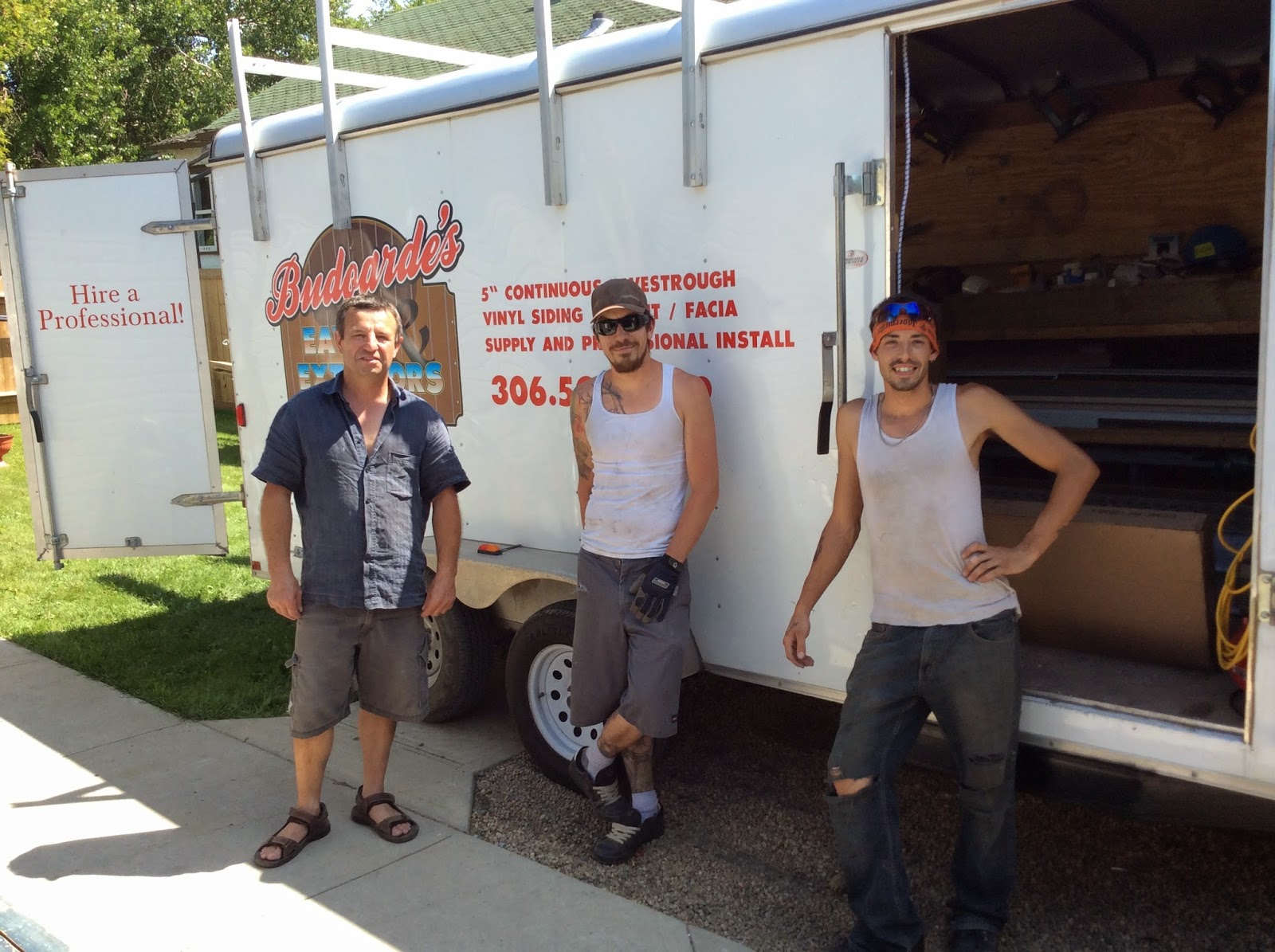 1. Firstly, they do not use aluminum. They use steel because there is so much ice and snow.
2. They also do not use hidden hangers. They use galvanized steel spiral nails or Alu-Rex 5200 T-Rex to make the eavestroughs stronger.
3. Their eavestroughs have no downpipe outlets. They use a punch that knocks an X pattern where the dowpipe goes.

Those are some of the major differences. There were a bunch of small things they do differently too. It was quite an education for me and Eddy was more than happy to show me all the differences. He even spent time showing me some different ways of attaching fascia, soffit, and siding which is quicker and makes it attach more strongly to the house. Eddy, for sure, is a class act!

The next obstacle was how to get all these long lengths of eavestroughs back to Moose Jaw, an hour drive across the trans-Canada Hwy. We had no truck or van. All we had was my daughter’s small Honda CR-V. It took us a while to get it on the vehicle securely but we did it and away we went. Here is a picture of us hauling the new eavestroughs to my daughter and son-in-laws……don’t laugh! 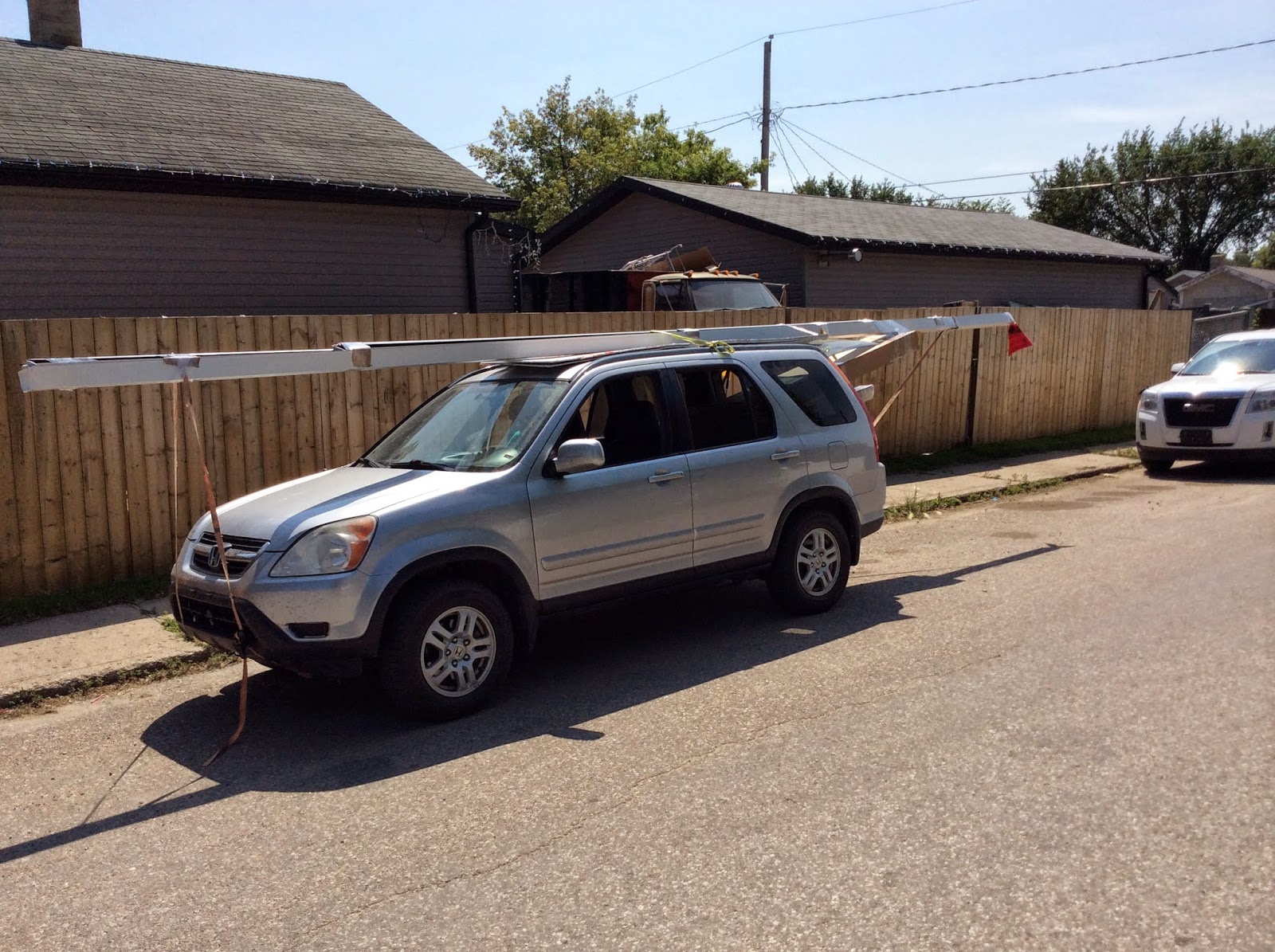 I was a bit paranoid on the drive back to Moose Jaw. I was concerned about a high wind blowing the eavestrough and bending it. I knew we had it secure enough that it was not going to come off the vehicle. The trip was uneventful but we did get a share of people looking at us and pointing. LOL

I and my son-in-law, Marc, started the job. It posed a few challenges. Marc had never installed eavestrough before and I had never worked with steel eavestrough. I also did not have all my tools from home so we had to improvise.

Here are a couple pictures of Marc and I hard at work. 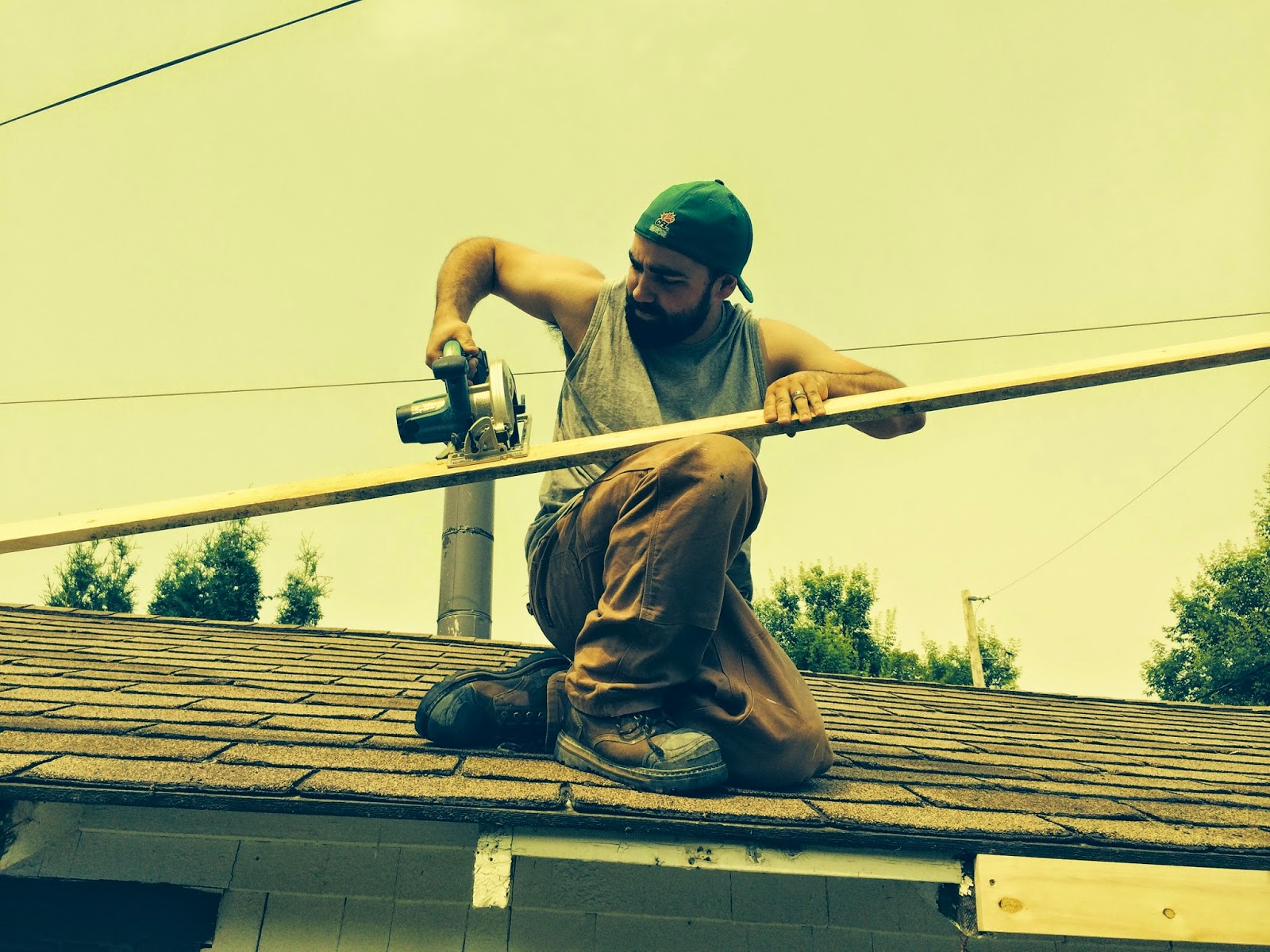 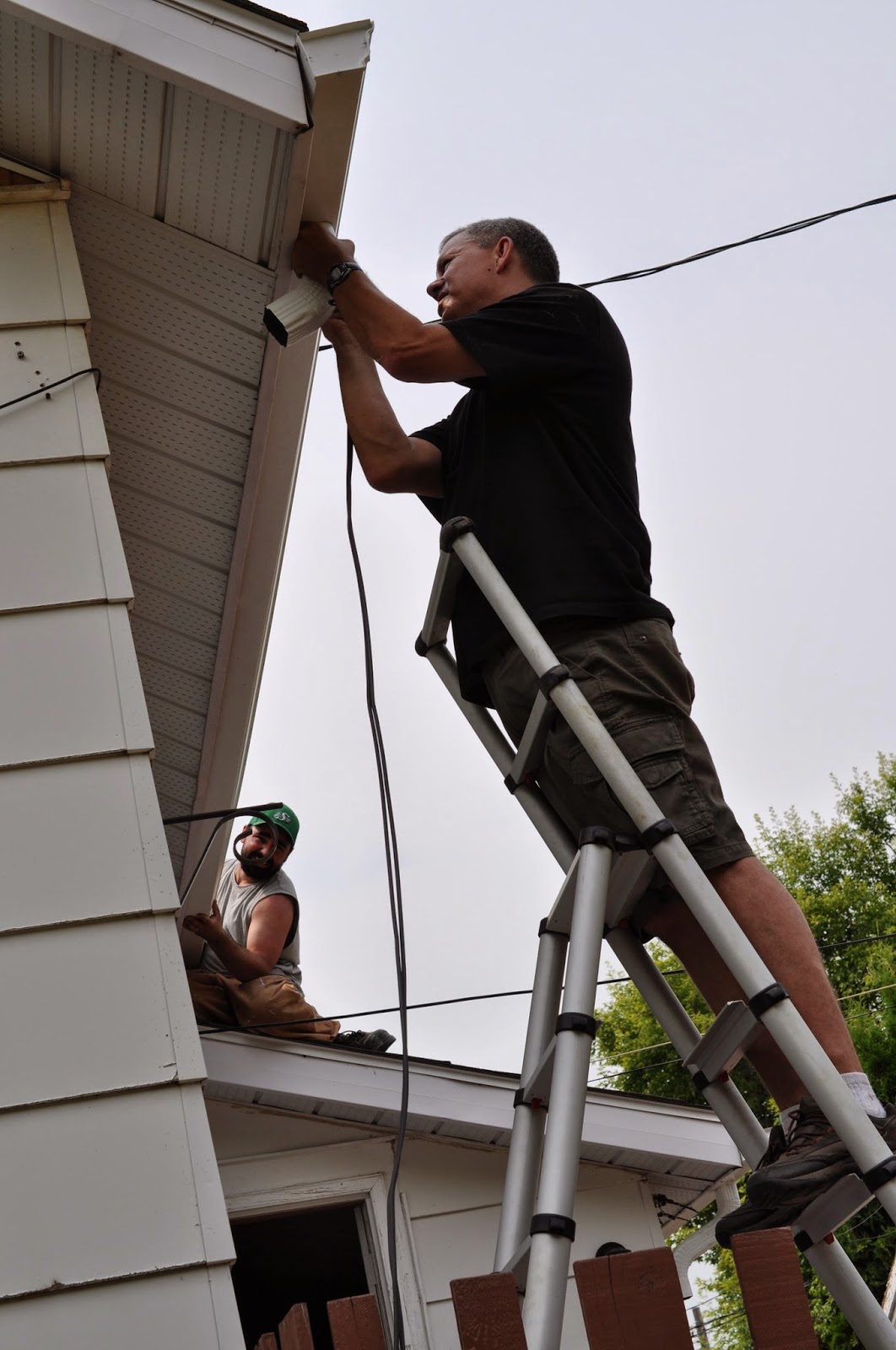 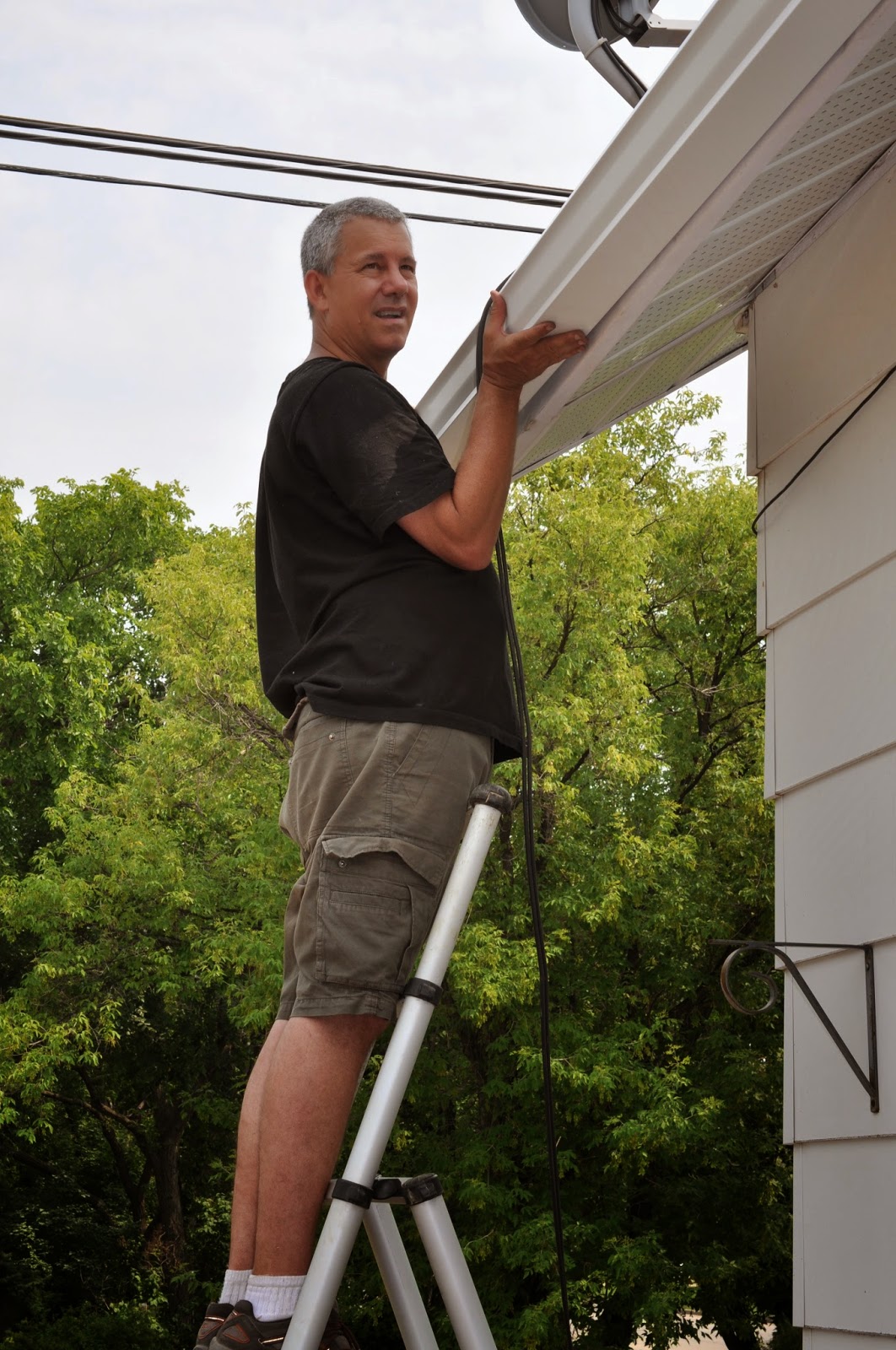 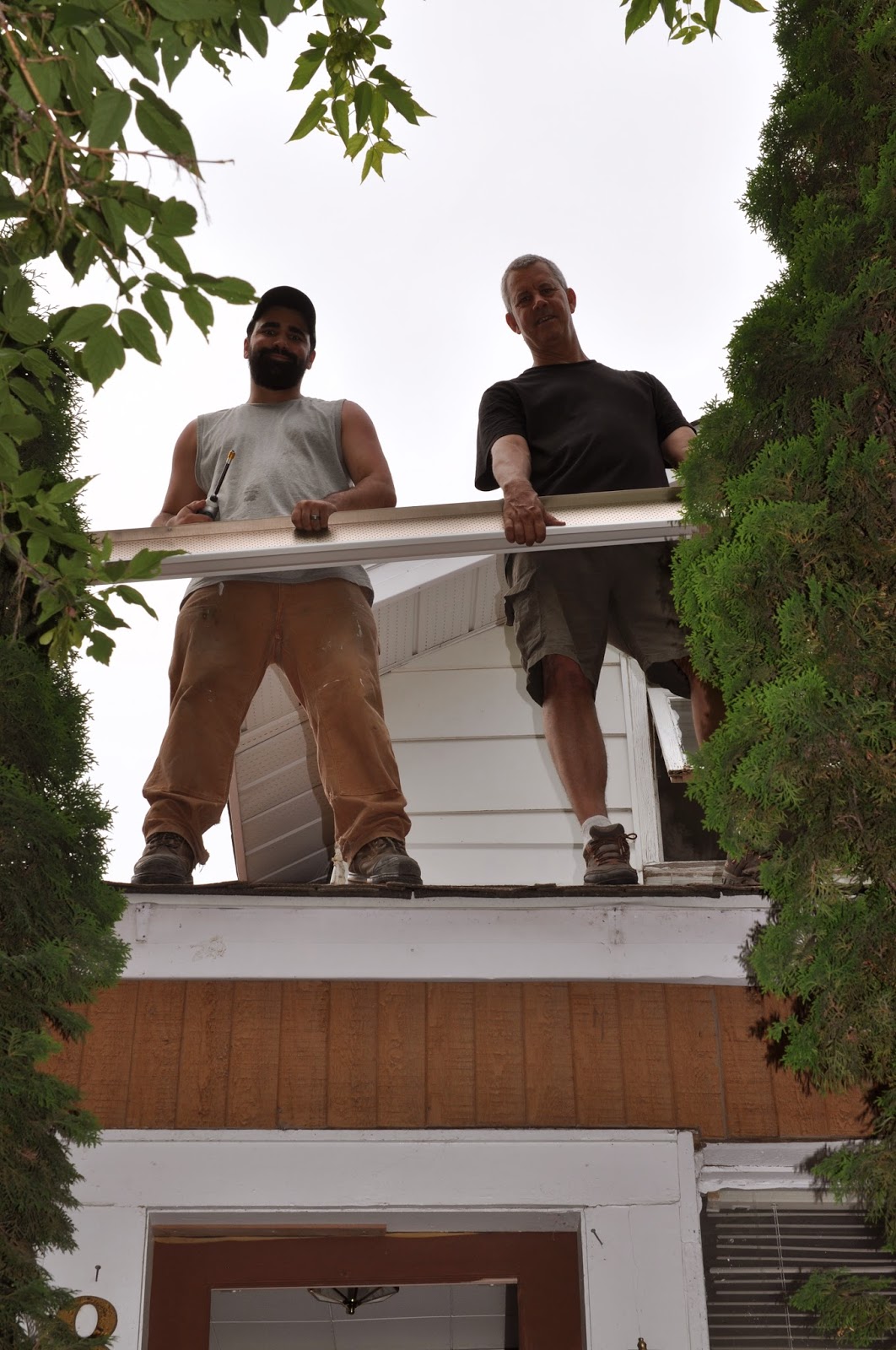 At the end of the day, it was Mission accomplished. The house was completed. 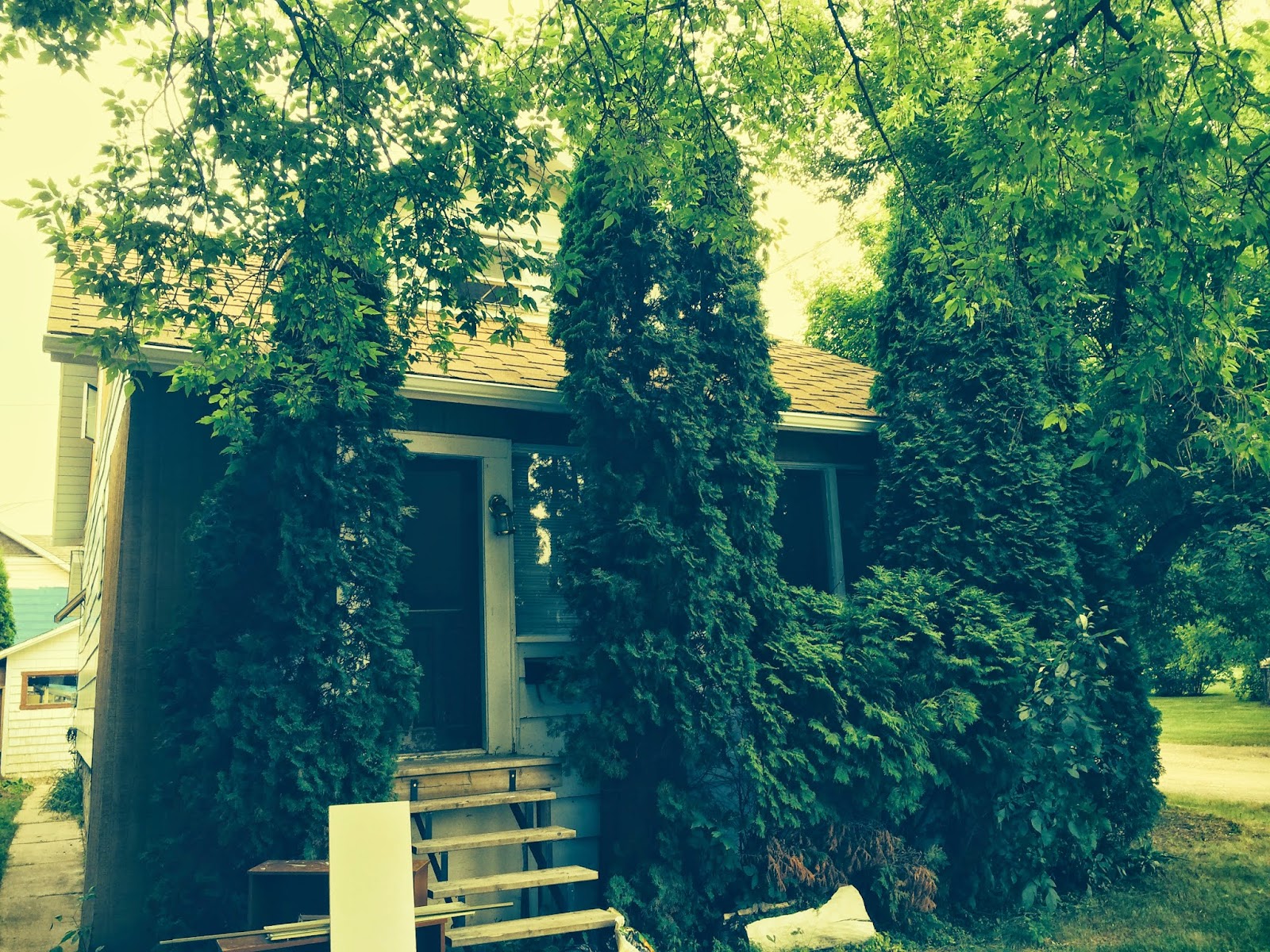 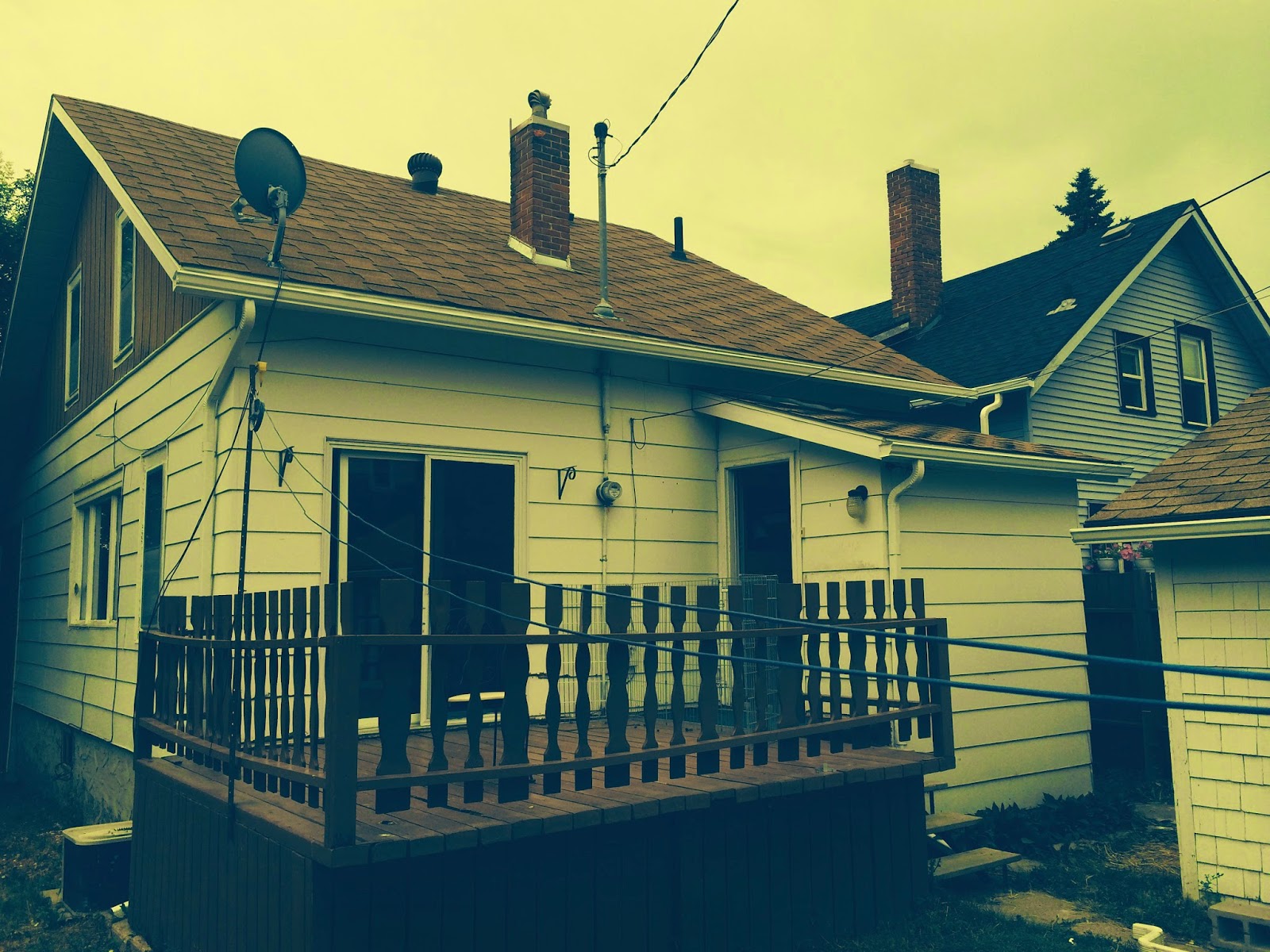 We were finished just in time for the next door neighbour to come home and bemoan the fact that she could not get anyone to install new eavestrough on he home and she had been trying for two years. So, I’m a suck for work……I offered to do her job and it paid for the whole vacation. My daughter and son in law got their eavestrough, pro-bono. After all, they are my most special customers! 🙂

The highlight of the trip for me was not doing the two eavestrough jobs and learning the many different things about eavestroughing in Saskatchewan. It was the news that me and my wife are going to be first time GRANDPARENTS in January 2015. We even got to accompany my daughter to the doctor and hear the baby’s heart beat. What a thrill!  Here’s my daughter! She is such an angel! 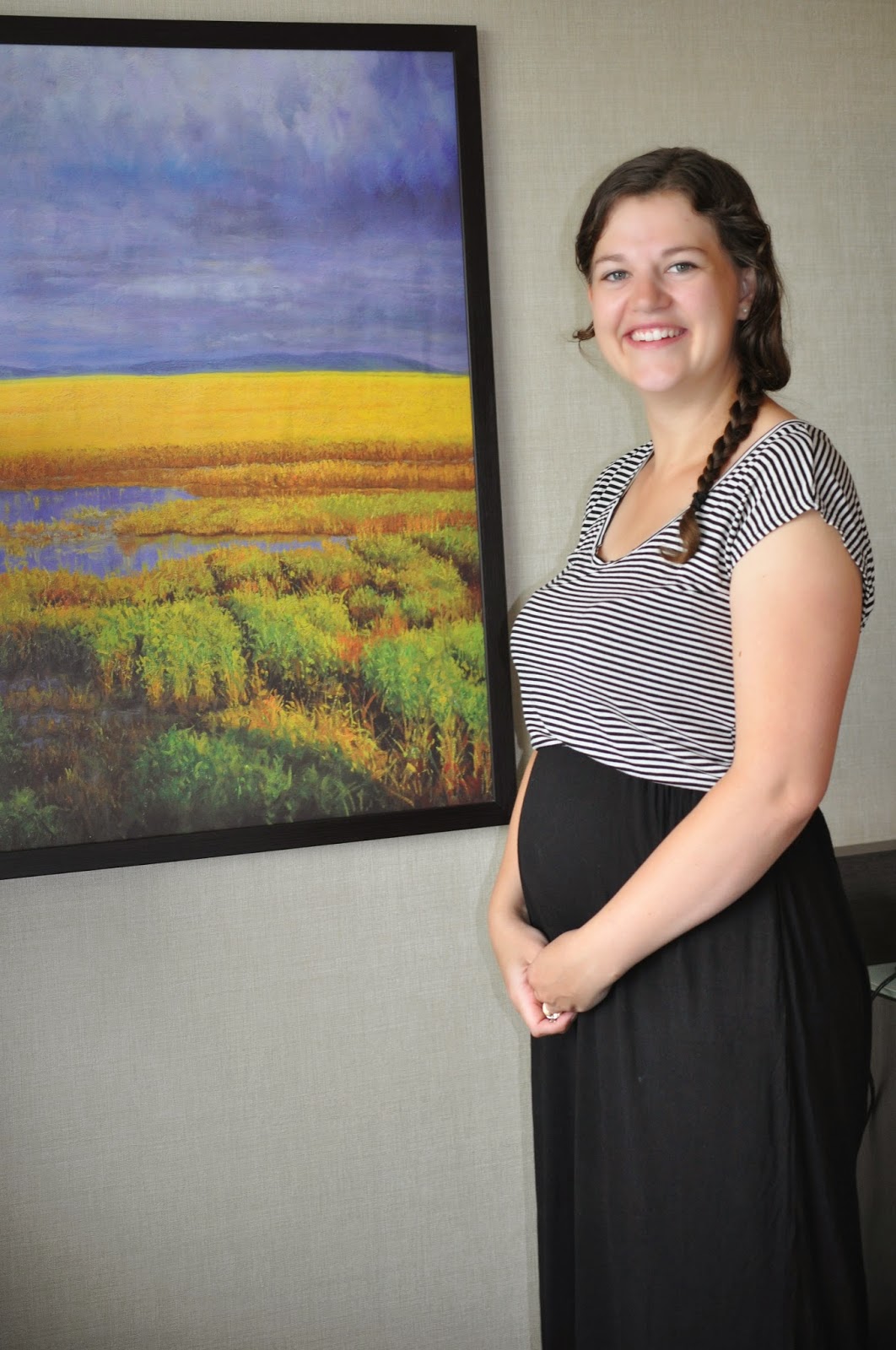 The Eavestrough Company is guided by these fundamental principles.